A very special party took place at Neville Williams House on 6th February to celebrate Ruth Reece’s 100th birthday. Ruth, who has been a resident for four years, was treated to her very own butler for the day and as part of the celebrations, enjoyed entertainment from a singer.

The onsite pub was dressed for the occasion and Ruth’s family and friends enjoyed sharing food, drink and memories together. Her telegram from the Queen was framed and took centre stage in the room and photos of Ruth throughout her life appeared on the television screen.

Originally from the East End of London, Ruth, known by her friends and family as Ruley, got her first job at the age of 14 in a shoe factory. During the Second World War aged just 19, she joined The Women’s Auxiliary Air Force (WAAF) and became a barrage balloon operator, taking great pride in the fact that it took nine women to the job formerly done by 14 men!

Debbie Sigston, General Manager said: “We feel privileged to be a part of Ruth’s special milestone birthday and it has been lovely to see her friends and family celebrating with her.”

Ruth’s two brothers Donald and Dennis were at the party and reminisced about Ruth in her younger days. Donald told us:

“Ruth has always been very down to earth and the sort of person that is friends with everyone. She was always the life and soul of the party.”

Dennis said: “If I live to be 100 like Ruth, I’d love to end up in a place like Neville Williams House!” 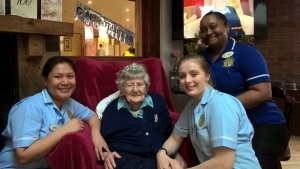 About the Author: creative

This website uses cookies to improve your experience while you navigate through the website. Out of these, the cookies that are categorized as necessary are stored on your browser as they are essential for the working of basic functionalities of the website. We also use third-party cookies that help us analyze and understand how you use this website. These cookies will be stored in your browser only with your consent. You also have the option to opt-out of these cookies. But opting out of some of these cookies may affect your browsing experience.
Necessary Always Enabled

Any cookies that may not be particularly necessary for the website to function and is used specifically to collect user personal data via analytics, ads, other embedded contents are termed as non-necessary cookies. It is mandatory to procure user consent prior to running these cookies on your website.